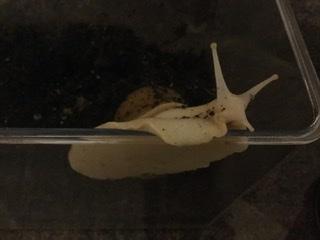 See everyone, anything Mountbatten can do on Mrs. Matthews’ page, I can do too. This is a photo of me pretending to escape over the weekend. I wasn’t really escaping because I don’t know where I’d escape to....the toaster is too dangerous and hot, the washing machine is too wet and speedy, you mustn’t play with ovens, so I’m much safer in my own house.

Can you see my foot?

I taught Mr.K a trick with his foot and he’s been trying to work out how it happens all weekend. Here’s what you do:

1.  Stand up and start rotating/turning your RIGHT foot in a clockwise direction.

2.  When you’re going along nicely with this, with your RIGHT hand, draw a 6 in the air.

3.  Your foot will have changed direction and will be moving ANTI clockwise.

Its a well known trick in Snail Land and it was funny watching Mr.K getting madder and madder.

I’ve made a list of things you can try when you’re out in your garden or on a walk. It’s like things you do at Forest School but if you can keep a record in your diary or show me a photo that would be fantastic. Remember that you will need to do some of these with an adult.

See how you get on!

I’ll give you today’s joke now:

What do you call a dog that does magic tricks?

A labracadabrador.............hope you’re reading Mrs.Matthews, the standard is getting higher!

Today Mr.K decided to make a list of jobs to do while Mrs.K was being very busy. I watched him very carefully and this is what he wrote:

3. Look for another pen because the first one doesn’t work.

5. Eat a chocolate crunch biscuit to check that they’re not soft or out of date.

9. Have another biscuit to go with the brew.

As you can see, this is a rubbish list and Mr. K is not trying hard enough. So I was wondering if you can all make a sensible list to help everyone in your house. Let me know how you got on.

I’m off for some cucumber now so later I’ll make a list of Forest School things you could try at home and type it up tomorrow.

Well I finally woke up and had some grape and a slice of cucumber for breakfast. I also like to eat fish food flakes made into a watery paste. It sounds and smells disgusting but tastes delicious.

What do you think of that picture of me sleeping? I have a beautiful shell don’t I? Do you know why it’s so shiny?

It’s because I use Mrs. Kieran’s SNAIL VARNISH on it!

You see Mrs. Matthews, the jokes have improved already!!

So it was April Fool’s Day today....did any of you play some pranks on your family?

I decided to fool Mr and Mrs.Kieran by hiding.

When they were having breakfast, Mrs K looked at my house and said that she couldn’t see me. (Mr.K said a word that he can’t say at school.....or anywhere really).

They both left their toast and had a look for me. I wasn’t buried in the soil....I wasn’t under my surf board (cuttlefish)....it was a bit of a quiz....then they saw me hanging upside down  from the roof of my house. They didn’t know that was one of my talents.

The best thing is that Mr.K can’t prank me back because you’re not allowed to do April Fool returns after noon. 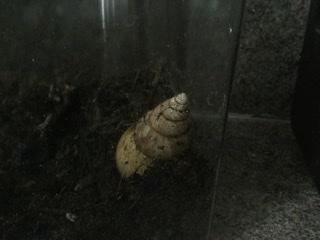 I’ve been sleeping for the last 2 days and Mr. Kieran says I have to be a tiny bit more exciting if I want to carry on writing my diary.

If you are in Mrs.Matthews’ class, you will know that I am her African snail who went for a holiday in Mr. Kieran’s classroom.

However, because he had to take me to his house when the school closed, I have found myself on another holiday. I will try to keep you up to date with my adventures.

One thing I do know is that the jokes I tell you will be better than the ones on Mrs Matthews’ pages.